I think there can be many fears that a perfumista can face, be it using the final drops of your favorite perfume, the discontinuation of your most beloved fragrance, dropping and breaking a beloved bottle, just to name a few.  However, it never occurred to me until the other day, my worst fear (unbeknownst to me) became my reality; the loss of smell.  I never had thought that I could really ever lose my sense of smell, but it’s real and its harsh.

Right before I left for my holiday trip to Mexico I was struggling with a virus.  My nose and throat were bothering me and I made sure that I went to the doctor prior to the trip so I could ensure that my vacation would be saved.  So off we went and I managed to feel great, until a couple of days after we returned and I started feeling a bit under the weather again.  It hasn’t helped that this has been the coldest winter in many years, but this bug has just lingered on now for about a month.  So I went to the doctor this past Friday and he tells me that once again I’m dealing with a virus, but since I have been struggling with it for almost a month that he believes it’s coming to a head and should be gone in the next week.  He told me to pick up some Mucinex at the drug store and that I should be set.  Fine.

The week prior to going to the doctor I scanned the web to see if there were going to be any good estate sales in town and I found that there was a sale in Washington DC for some deceased socialite and they listed that there was perfume for sale.  Typically, estate sales might have a bottle of Elizabeth Taylor’s White Diamonds for sale, but I thought that I would check this one out since it sounded like it had some promise.  So Saturday morning, I dragged my sweet husband out in the 15 degree weather to stand in line waiting for the opening of the sale.  Of course it was freezing, but thankfully the line was not that long.  Now of course, I’m worried that someone will get to the perfume before me, but I have no control over that. 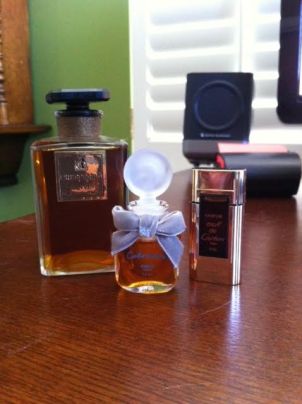 After about 30 minutes they finally let us in (they were regulating the number of people in the house) and I made a beeline for the perfumes.  Let me first say that people coming out of the house while we were waiting outside said that there were some nice items for sale including a Lalique bowl and some Hermes handbags, but that the prices were rather high.  So comments like that made me hopeful.  So in the corner of this small room where all these people were looking at jewelry and purses, there was a small section of perfumes.  The socialite had good taste.  There on the table were about 20 bottles of various sizes.  There was not a  bottle of White Diamonds, instead there were vintage bottles of Y by Yves Saint Laurent, a couple of bottles of Dior Poison, a large bottle of Rochas Femme, a huge bottle of Eau de Joy (in the box) and others.  And no one else was looking at the perfume.  I was in heaven until I lifted the first bottle to my nose.  Nothing.  I could not smell anything.  I asked the hub if he could smell anything and he said yes.  I lifted the top off another bottle and a woman from the other side of the room said that it smelled wonderful.  I could not smell anything.  I put a dab on my skin.  Nothing.  As much as I have heard of the perfumes, I wasn’t familiar enough with them, and I needed to smell them to see what I really thought.  So I relied on my husband to describe.  Well, as sweet as he was, all I could get from him is, “it smells like old lady” or “it smells like metal.”

So this brought me to my lesson learned…I had my phone with me.  If I would have been thinking, I would have opened up Fragrantica to look up the fragrances so I could see their notes.  I know what I like and I could have gotten a better sense of what I should get even without being able to smell them.   Of course I didn’t think of that until after I had left the sale!

So given that the prices were OK and that I didn’t have a fortune to spend, I had to make some choices.  So I managed to walk away with a vintage bottle of Cabochard parfum, a small bottle of Must de Cartier parfum and a large 50ml bottle of vintage Lanvin Crescendo (all of them unopened) and of course, none of which I could smell.  Thankfully that problem is starting to change now but I’m not going to review them until I have my full nose back as I don’t want to read them wrong.  As for the bottle of Rochas Femme (it had to have been a 200ml bottle)…I could kick myself for not getting it.  If only I had used Fragrantica at the sale!

In any case, more to come on my new purchases and some other vintage fragrances that I have recently come into.  I don’t know what it is with my interest with vintage fragrance during this time of the year.  Maybe it’s because I find that vintage scents have the wonderfully comforting familiarity from my childhood and when it’s cold and nasty outside, smelling and surrounding myself with them makes me feel good.

Don’t worry, I’ll be back.  Not sure when the nose will allow for it; but we’ll be back!

29 thoughts on “A Perfumista’s Worst Fear”