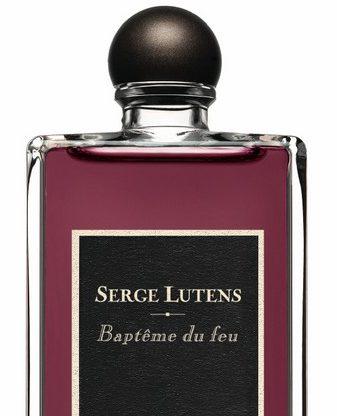 WHAT I SMELL:  Wow…Baptême du feu has a wonderful opening that’s cool to the touch, incredibly juicy and vibrant with a blast of bright citrus and bergamot.  The perfume begins to warm quickly and the juiciness subsides to reveal a ripened osmanthus along with an orange rind like sourness.  After 10 minutes or so, a ginger note begins to surface along with a wafting incense.  What was joyous and bright has moved to a mysterious tonality.  The perfume then takes another turn and the incense disappears and the perfume become fully ginger…and it grows exponentially in projection.  But of course, Uncle Serge needs to contradict my words and once again, a wafting incense reveals itself.  The ginger makes the perfume a little sweet, but not too much as there’s a light herbal base that resides under the candied root.  After an hour, the perfume begins to dust and powder with a metallic edge as the candied aspects are lessened.  In the end you’re left with a woody powdered ginger dustiness.

My emotions are fluid. Like liquid wax poured into a mould, they determine what seduces me—like this gingerbread heart. – Serge Lutens

WHAT IT SMELLS LIKE TO ME: Pippi Longstocking…it starts off bright, juicy and full of candied ginger…but as it wears it loses its initial gloss and becomes rather tiresome.

WHAT OTHERS ARE SAYING ABOUT BAPTÊME DU FEU:  Persolaise, Kafkaesque, Perfume Posse

BOTTOM LINE:  For the first 45 minutes of wear, I loved this perfume as its full of life and absolutely delightful.  After that, its pleasant enough. Ho-hum.

WHAT I SMELL: Cuir Mauresque opens oddly sweet and tangy, like soured candy sprinkled in sugar and it’s as if that layer of sweet rests on an orange like plastic.  Actually, more precisely, this smells like something sealed in plastic that when the seal is broken, the chemical plastic odors that were trapped inside are released.  After a few minutes, a sour note appears, like ripened apricot.  After a few more minutes, the leather starts to appear.  It’s rather faint and not harsh, but there is a sharp edge to it that makes the back of my tongue curl.  After another five minutes or so, the jasmine takes center stage and the fragrance begins to bloom and thankfully, that helps to push out the sour.  Unfortunately, the sour is pushed out but the sweet comes on very strong.  It keeps building and it smells artificial and manufactured.  Thankfully, after around the 30 minute mark, Cuir Mauresque becomes slightly more muted, but not enough to make me love it more. 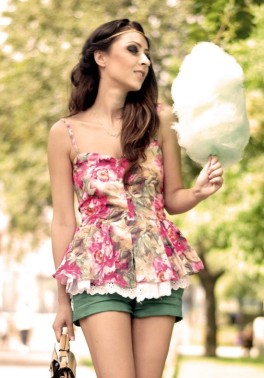 When I typed in “floral candy” in Google Images, this is what came up. I had to use it as her top, the headband and the cotton candy just somehow aren’t quite right, just like the fragrance.

WHAT OTHERS ARE SAYING ABOUT CUIR MAURESQUE: Kafkaesque, What Men Should Smell LIke, Notable Scents

BOTTOM LINE:  This is one of the Serge Lutens that you don’t hear much about and if it wasn’t for the wonderful Kafkaesque I probably wouldn’t have bothered to check it out.  Unfortunately, this one wasn’t meant for me.  In the end, it evens out, but this is one odd duck that I can do without.

WHAT I SMELL: Opens with a bright and sweet tuberose which is very sunny and fresh.  After a couple of minutes I detect light citrus with a bit of mint or maybe a slight incense.  Whatever it is, it makes this more interesting in that its not just another sweet floral.  After about 10 minutes, Datura Noir starts to even out and it becomes a bit creamy.  There’s some meat to this beautiful flower as it seems to expand on the skin.  After around 20 minutes I can detect a bit of apricot wrapped up in the flowered musk.    The fragrance then becomes a bit deeper and richer in its complexity and as time goes on keeps growing in strength, with the almond making it’s appearance in almost a candied fashion which is probably because of a coconut note which adds an “Almond Joy” element to the fragrance.  For an expansive period of time Datura Noir is a fragrance that does not know the meaning of shy.  In the end though, Dratura Noir quiets down into a light musky tuberose that is comforting in a slightly sweet way.

WHAT OTHERS ARE SAYING ABOUT DATURA NOIR:  Smellythoughts, Kafkaesque, My Perfume Diaries

BOTTOM LINE:  I found the following when I Googled Datura:

Given that, Datura Noir is neither hallucinogenic nor dark…but instead is a charming and intoxicating floral beauty which was a complete and pleasant surprise!