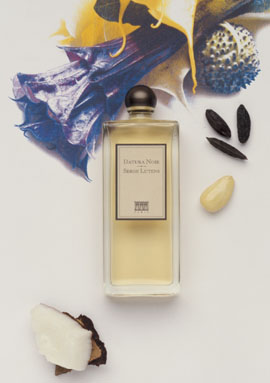 WHAT I SMELL: Opens with a bright and sweet tuberose which is very sunny and fresh.  After a couple of minutes I detect light citrus with a bit of mint or maybe a slight incense.  Whatever it is, it makes this more interesting in that its not just another sweet floral.  After about 10 minutes, Datura Noir starts to even out and it becomes a bit creamy.  There’s some meat to this beautiful flower as it seems to expand on the skin.  After around 20 minutes I can detect a bit of apricot wrapped up in the flowered musk.    The fragrance then becomes a bit deeper and richer in its complexity and as time goes on keeps growing in strength, with the almond making it’s appearance in almost a candied fashion which is probably because of a coconut note which adds an “Almond Joy” element to the fragrance.  For an expansive period of time Datura Noir is a fragrance that does not know the meaning of shy.  In the end though, Dratura Noir quiets down into a light musky tuberose that is comforting in a slightly sweet way.

WHAT OTHERS ARE SAYING ABOUT DATURA NOIR:  Smellythoughts, Kafkaesque, My Perfume Diaries

BOTTOM LINE:  I found the following when I Googled Datura:

Given that, Datura Noir is neither hallucinogenic nor dark…but instead is a charming and intoxicating floral beauty which was a complete and pleasant surprise!