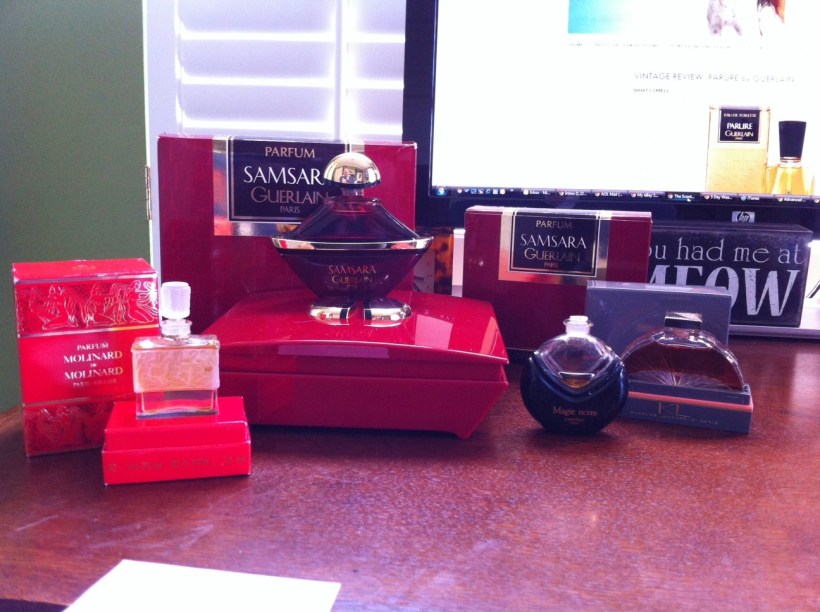 Once again, I found an estate sale up in Maryland where there was going to be some upscale perfumes for sale.  As the sale was to start on Saturday morning at 8am and they were taking numbers for first in the door starting at 7am, I made sure that I was up early to head 30 miles away to stand out in the dark to get one of the first numbers.  To my surprise, my hubby wanted to come with me (getting up at 5:30am…I think my crazed madness for this all provides some amusement to him) and we were standing at the door at 6:45.  You think that I would have been number 1, but instead my number was 9.  The people in front of me seemed to be pretty innocuous and I was hoping that they were.  My hubby for the past week was asking why we needed to be there early because who want to buy old perfume?  He probably was right, no one but me.

So 8am sharp the door opens and who wants to buy perfume?  Everyone wants to buy perfume.  There was a mad dash by 4 people in front of me and they were hogging the space getting first grabs (OK, they were first so they got first dibs, but from my vantage point…well, you know).  In any case, I ended up getting some sweet items, but what I really wanted was the unopened vintage Magie Noire’s, which there were 2 parfum extraits.  I had to settle for the 7.5ml used version with the missing top.  But for $5, who cares.

So what else did I get?  A 7.5ml bottle of vintage Molinard de Molinard parfum extrait in a Lalique bottle that was still in its cellophane.  It is a beautiful gem of a bottle and I love the juice, all smokey and leathery in the beginning, only to turn into a light fruity breeze in the end.  I am more of a Habinita fan, but I love this little jewel.

I also got a 7.5ml bottle of vintage Lagerfeld, KL parfum extrait.  Again, still in the cellophane.  Deep rich and rather manly, I have the feeling that I’ll be wearing this alot.

And then there’s the 30ml bottle and 7.5ml bottle of Guerlain Samsara parfum extrait.  I only had a tiny bottle of vintage Samsara EdP as part of my collection, so this was a real treat.  And to be honest, I don’t need the 7.5ml bottle, so if anyone in the US is interested, I may be willing to part with it.  Just drop me a line.  Funny, I was able to check the codes to see what year they are from and both are from 1989.  However, the large box has no bar code and the small box does, so it’s right in that period where bar codes started coming into existence.

Overall, I’m glad I got up early to get to the sale.  But since I now know that there are other vintage perfume hunters out there, I’ll make sure that I get there at 6:30 next time rather than 6:45!

And I need your help on naming some perfumes.  The following photos are for a sale coming up right around the corner in a couple of weeks.  I believe the yellow box is L’Air du Temps but can anyone identify what else is on the table? 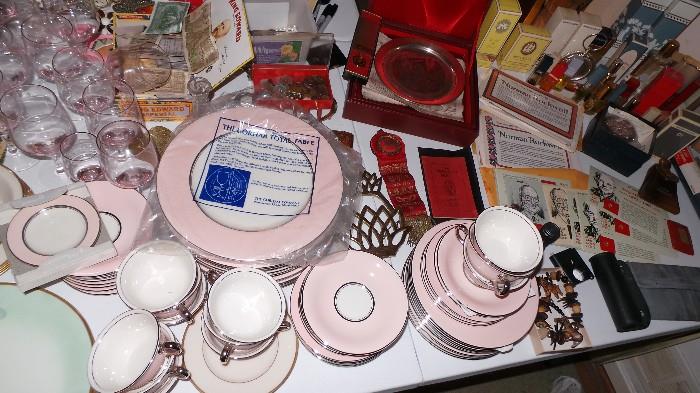 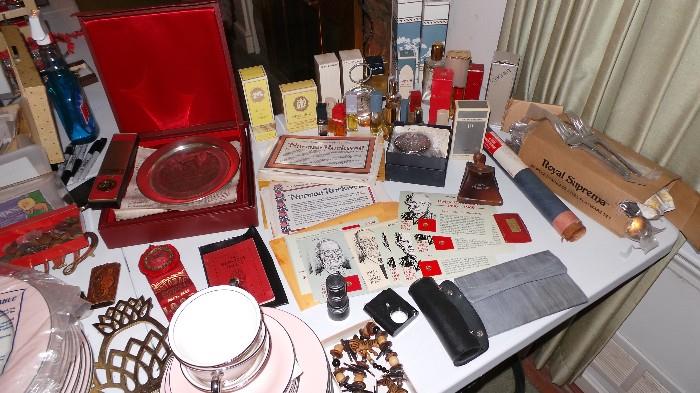 26 thoughts on “Yes Virginia, there ARE plenty of vintage perfume lovers out there!”