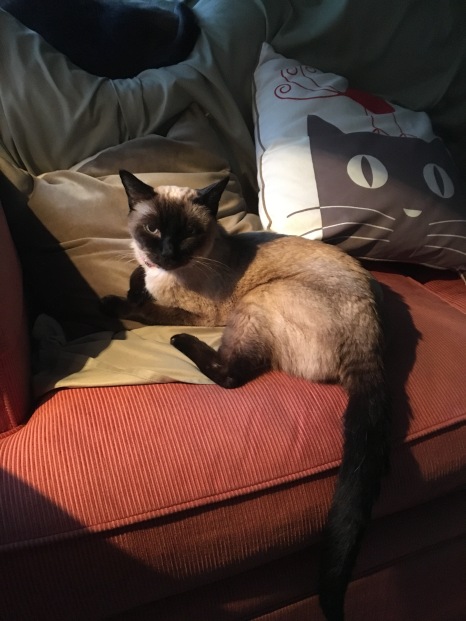 When we lost our girl Jessie 10 years ago, her sister Snow was beyond consolable.  Always a character, she was becoming more of a fussbudget and curmudgeon as she grew older.  We thought that maybe having another cat around the house would bring her some welcomed company.  We took a trip into the city to an adoption event and found the most beautiful chocolate point Siamese girl, appropriately named Francesca.  Mark picked her up and she immediately buried her head under his chin.  It was love at first sight.  She was ours.

We brought Francie home and kept her under a watchful eye for a few hours until we stepped out to run a few errands.  When we got home, there was no sign of Francie.  We tore the house apart only to find her hiding in the one impossible to get to area of the house; a small space between the drywall and outer wall of the basement behind the water pipes.  Panicked, but not knowing how to get her out we thought we would just wait and she’ll eventually emerge.  Hours passed…nothing.  Then I thought, let’s try saying a magic word:  “treats.”  Immediately she came out from her hiding space and gobbled up her reward.  From that point forward we knew this orphan was a princess.

Getting Snow a companion turned out to not be the best idea for Snow herself.  She was not fond of Francie, but Francie was always respectful of Snow and her rank of queen of the house.  She never challenged her, nor gave her any grief and actually was kind to her even though Snow continued to become more confused and curmudgeonly.  Less than a year later, we lost Snow and Francesca took her role as lady of the house.  Since getting Francie, we have added Duncan to the house who she treated like a loving older sister.  And Lily, who for years she viewed with suspicion, but eventually tolerated, like Snow did with her.

We’re not quite sure how old Francie was when we adopted her, but the doctor thought that she probably around two.  As she was so sweet, we wondered why someone would have gotten rid of her.  When we adopted her, the shelter said that she had been living outside, even though she was declawed, and someone was feeding her for a couple of months until they brought her to the shelter.  Once, we took her to the doctor because she was having some leg pains….they completed an x-ray and they found that her back leg had once fractured and healed on its own.  The doctor said that most likely she was hit by a car and because if it, would most likely end up with arthritis.  Francie never had a desire to ever go outside or to even look out of the window…we now knew why.

Whatever her background, Francie had been well taken care of at one time.  The fact that she knew the word “treat” means someone had given her love.  Plus, as a princess, she loved her people food and we obliged her with cooking her chicken thighs (dark meat only!), giving her licks of ice cream and making sure that she had treats whenever she wanted them.  She even had a love of perfume which I once wrote about.  We knew that she once had a hard life and it was our job to ensure that she was well taken care of.  Besides, she never demanded it.

Cats, like all animals, have such distinctive personalities.  Francie loved to hug on her dads and was always obliging with a kiss.  You could talk to her and you knew that she understood each word.  At night, she would curl up in Mark’s arms, her favorite place to sleep.  She was a lady in every sense of the word as she was gentle, always thankful and lovingly sweet.

Last year, Francie was struck with pancreatitis. It was very painful to her, but through medication we were able to ease her discomfort.  This, along with the emergence of kidney disease we knew that our time was limited, but for the past nine months she was doing incredibly well.  We were surprised that within three days the decline was rapid and immediate.  It didn’t feel like we had adequate time to say goodbye.

The house feels different now.  We don’t have that steady sweet presence that was always obliging with a hug and a kiss.  We miss our lady and our princess but we know that our lives converged for a reason. We love you Francie.   Thank you for enriching our lives.  You were special.

40 thoughts on “Ode to a Princess”