The view from our balcony!

Back to life, back to reality!  We had a wonderful 9 days in the Dominican Republic.  We spent our time in the beach town of Las Terrenas on the Samana Peninsula.  It’s a beautiful place that is a bit off the beaten path; not the typical US “all-inclusive” destination that tends to be sanitized.  As such, Las Terranas is a working town were you experience the locals living the island life.  In fact, we didn’t run into any American’s on our trip except for one restaurant owner who grew up in Brooklyn, but went back to the island to live with his relatives.   Coming back makes you realize how sterile of an environment we live in…I could live there in a heartbeat. 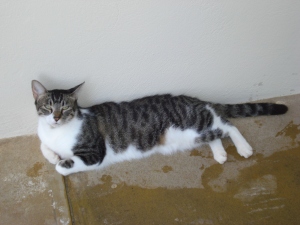 Once we got settled in, we forgot what day of the week it was.  Mornings started off with a wonderful breakfast at the hotel (where we made friends with 2 cats which we decided to name Bonita and Plantaina), then a walk on the beach, then lazy time on the beach or by the pool and then afternoon exploration.  Then finally, a wonderful meal in town (we didn’t have a bad meal anywhere we went).  And we did eat and eat and eat.  Where else could you get a full lobster for lunch for $10!??  Living was real hard as you can see.

Here are just a few of my observations from our trip:

Getting back into the swing of things since the trip has been challenging at best, but I am slowly getting back in the groove.  Today however, I took off work so I could go to the doctor to get all of my shots for African Safari trip scheduled for February! Yea! (that yea is for the trip, not for the 5 shots I received!)

19 thoughts on “Observations from the Dominican Republic”