WHAT I SMELL:  Not surprisingly, Bucoliques de Provence opens with a soft cashmere iris which is soon met with a deep brown sugared and herbal lavender.  It’s slightly medicinal, but very comforting; and in all it’s just so pretty and calming.  Soon, a mix of herbs and spices pepper the lavender, making the perfume feel a bit chewy vs. the standard powdered dry lavender that we associate with the note.  As the perfume continues to develop, it begins to flatten and it takes on a more woody consistency.  At the same time, the spices really come forward…actually, in a quite caustic manner.  What used to be calming, now has an unfortunate bite.  After quite some time, the lavender turns to a laundry detergent familiarity and the perfume feels like it should be used as more of a bed or room spray.  Supposedly there is some leather in here, but I’m not picking any of it up.  Instead I am getting a dried flower kitchen witch vibe…and that’s not a good thing.  After quite some time, the iris comes back in with a light powder and the kitchen witch begins to dissipate.  The perfume becomes soft and kind of pretty…but unfortunately I’m left with a headache caused by the kitchen witch development

Bucoliques de Provence is a limited edition fragrance. It marks the beginning of a new collection inspired by different regions of France. This perfume pays homage to the history of Grasse. Perfumery in this region with its distinctive lavender fields, dates back to the 17th century and is linked to the historic production of leather. The perfumer has combined lavender and leather with iris and spices creating a soft, faceted scent. Bucoliques de Provence is modern in its pure and naturalistic approach.

Inspired by the savoir-faire of artisans in Grasse, an accord of leathery lavender, modernised by iris and spices. 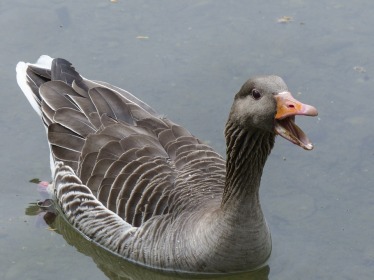 WHAT IT SMELLS LIKE TO ME:  A gray goose…kind of pretty, but not as pretty as a white swan, a little annoying and not as fun as a duck.

WHAT OTHERS ARE SAYING ABOUT BUCOLIQUES DE PROVENCE: The Scented Salamander, Chemist in the Bottle

BOTTOM LINE: The perfume’s opening is divine until you get to the kitchen witch in the middle which makes you want to run.  In the end, the perfume does calm down and becomes a quiet powdered iris, but that’s not enough of a save to make me want to come back.