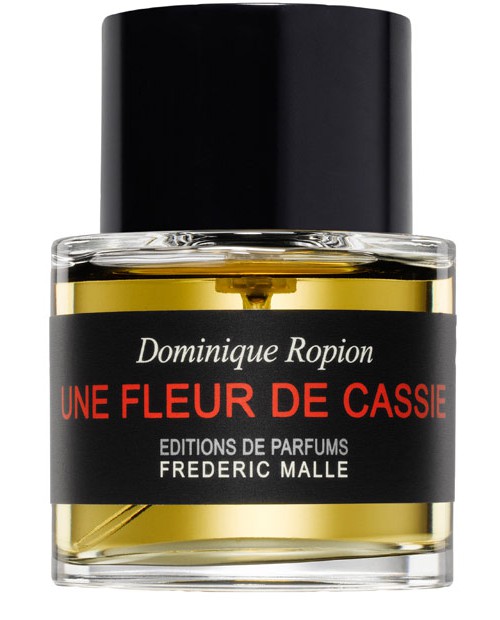 WHAT I SMELL:  Une Fleur de Cassie opens with bright aldehydes which move quickly into a mimosa note that is soft, airy, slightly fuzzy and which feels like it’s lightly infused with cotton.  The fragrance is rather dreamy and ethereal, but as soon as I say that, I can feel the perfume begin to grow and expand.  A hay like quality becomes the dominant presence, but the straw manages to remain light even though it’s saturated with modest florals which soften the perfume.  After and hour or so, the fragrance moves its attention to deeper consistency with a bit of leather and earthy rootiness making the fragrance move from the feminine to the masculine, but as soon as I say that, the tender flowers seem to dominate again. Une Fleur de Cassie is interesting in that it’s pretty, but not in a traditional sense.  Instead it is a captivating beauty made from the divinity of the earth through subtle and natural components, most prominent being the mimosa.  In the end, the fragrance doesn’t morph and transform all that much, but that’s perfect as Une Fleur de Cassie is simple beauty at its best.

The rare and exotic cassie flower is not easily tamed. Intoxicating and coarse, its fragrance is from another era. But the modern and infinitely precise writing of Dominique Ropion makes of Une Fleur de Cassie a very modern composition. This perfume is composed by rare ingredients such as mimosa absolute, jasmine absolute, cassia absolute and rose absolute, with carnation as a counterpoint, set upon a vanilla and sandalwood base. Rich, intricate, complex – like an haute couture gown.

WHAT IT SMELLS LIKE TO ME:  Emanuelle Beart as Manon in the 1986 film “Manon of the Spring”

BOTTOM LINE: In reading the reviews cited above, I seem to have a much simpler ride with Une Fleur de Cassie than others.  To me, the beauty in the fragrance is the simplicity in which it unfolds.  It does seem to change and morph a bit with your body chemistry and I am wondering if this would bloom much more significantly on me when the temperatures are warm.  As it stands now, it’s only 10 degrees outside leaving nothing to bloom at present!  I have the feeling my sample of Une Fleur de Cassie is going to be drained within the next few weeks.  Simply lovely.