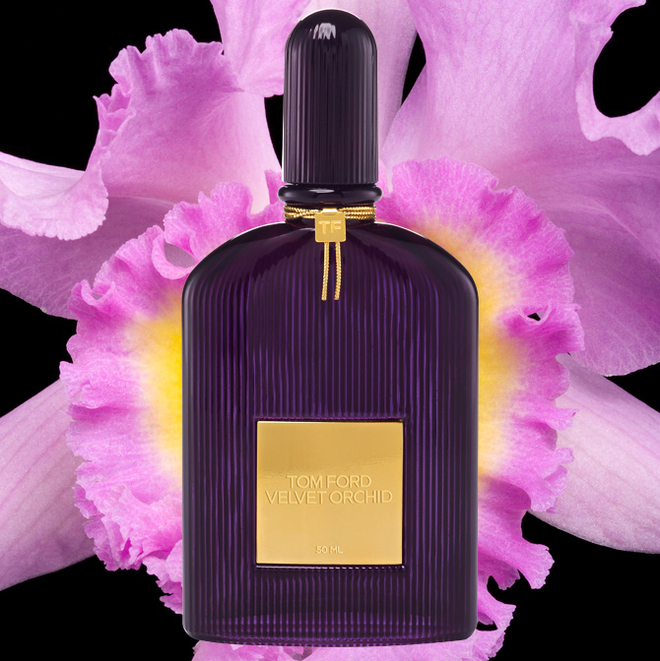 WHAT I SMELL:  Velvet Orchid opens with a sweet, rather honeyed opening that quickly moves to an odd combination of honey and graham crackers.  Yes, that’s it…like honey graham crackers.  After a few minutes, the orchid reveals itself and the honey graham cracker note leaves the room.  This is sugared and sweet and very rounded with florals that feel like they’re manufactured in a Chinese factory.  After around 15 minutes, the fragrance settles down a bit to become slightly woody with some added radiant warmth, but overall, it feels like a sweet and big Everlasting Gobstopper.  OK…maybe I spoke to soon. After around an hour and a half, Velvet Orchid becomes creamy and lighter with a smooth sandalwood finish.  At this point, the fragrance finally finds it’s “pretty.”  Oh, but what a horrific ride to get there.

After reading what I wrote above, I had to give this fragrance another shake to see if I was being fair to the perfume.  So I pulled out the tester a couple of days later. Let’s take a look at round two…

Testing Round 2:  Maybe it’s the weather (it’s cooler the 2nd time I tested this) or maybe it’s just my disposition, but the 2nd time I wore this I spritzed on just a bit less which I should always remember to do with a Tom Ford fragrance.  In any case, the harshness that I first experience was much more toned down.  I didn’t get the honey-graham cracker aspect that I did at first and albeit being sweet, the florals were far less manufactured.  The perfume is sweet and somewhat powdery, but much more palatable.  There’s a rather tropical feel to the fragrance this time as if the florals are hanging off of a vine and radiating in the sun.  There still is a honeyed note, but it’s light, not thick and just adds a sheen to the overall composition, like a layer of fine shellac.  This time there’s a slight hair spray aspect that I didn’t get at first, but it’s not offending and it adds just a tad of sharpness to the mix, but as soon as I smell that, a creaminess comes in with a radiant warmth.  The fragrance seems to transform much quicker than it did earlier, but that’s a good thing as it moved much faster to the stage of where I want it to be; a creamy orchid that’s soft, a little powdery and very smooth and pretty.

The fragrance opens itself with bergamot, mandarin, Succan absolute (purified rum extract) and honey. At the core of this creation (made of “corporeal floral notes.”) isTom Ford’s distinctive, “timeless” signature – an imaginary accord of black orchid blended with notes of velvet orchid, which gives the perfume its name, with intense Turkish rose oil and jasmine and a new accord of purple orchid that grows in the wilds of southern Brazilian coast. There are also additional floral notes of orange blossom, rose absolute, narcissus, hyacinth and heliotrope. The base is warm due to the rich flavors of Peru balsam, myrrh, labdanum, sandalwood, suede and vanilla. 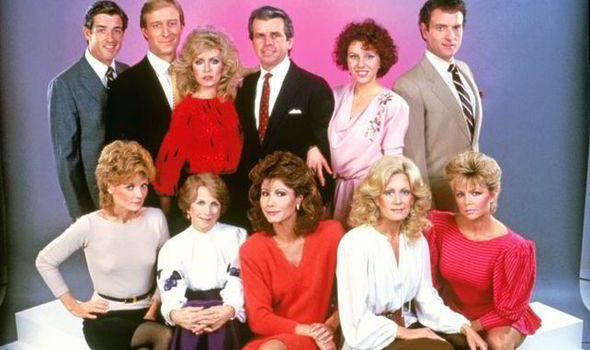 Trouble in the cul de sac…the cast of Knots Landing.

WHAT IT SMELLS LIKE TO ME:   What I got the first time I test was a “Knots Landing”  kind of big 80’s glamour stuck in a cul-de-sac perfume.  The 2nd time, what I got was just Donna Mills in Knots Landing, the prettier and more glamorous of the show’s entourage. 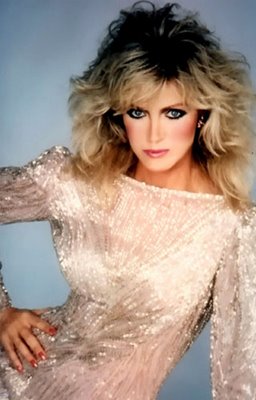 Donna Mills…the eyes have it!

WHAT OTHERS ARE SAYING ABOUT VELVET ORCHID: Kafkaesque, Now Smell This, CaFleureBon

BOTTOM LINE:  I never said that I was infallible and I try to keep an open mind when testing fragrances.  Tom Ford and I don’t always mix well with each other and I thought maybe this was one of those cases.  But I found that my review was rather harsh so I had a give the perfume another visit since my words were over the top even for me.  Whatever the reason, the difference between the 1st and 2nd wear was like night and day.  I loved Black Orchid and couldn’t imagine that this would be so polar opposite.  In any case, Velvet Orchid really is pretty…just remember to use a light application so you don’t get full on Everlasting Gobstopper!