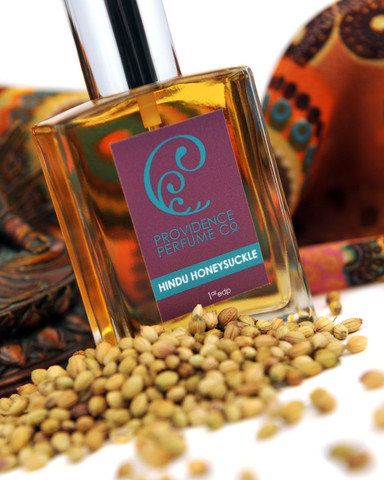 WHAT I SMELL:  Hindu Honeysuckle (how can you not love that name) opens with a rich, radiating and seductive heady, but not heavy, jasmine that is head spinning in its concentration.  It’s sweet, but in the way a flower on a vine is sweet and its as if the vine is going to wrap itself around you pulling you in as your captor.  After a bit, the fragrance begins to become more green but with tinges of spice lurking below.  I love the spice as it makes for an interesting balance between the sweetness of the floral, making it more exotic and earthy.  After around 15 minutes,  Hindu Honeysuckle is met with a layer of musk that creates a more flattened presence, but the beautiful florals continue to pulse and radiate as if to let you know that they the star of the show.  After around 45 minutes the fragrance becomes more comfortable as if the florals are now saying “ok, you know that I’m pretty, now just love me softly” and it stays there softly letting you know it’s there and that everything is OK with the world.

WHAT IT SMELLS LIKE TO ME: Beautiful, colorful and vibrant wild honeysuckle that takes your breath away.

WHAT OTHERS ARE SAYING ABOUT HINDU HONEYSUCKLE: EauMG, CaFleureBon, ScentHive

BOTTOM LINE:  I was going to complete a review on a fall fragrance, but I’m I just couldn’t give up on summer yet.  Hindu Honeysuckle is a great transitional perfume that could be worn in the summer and also in the winter when you want to chase the blues away.