‘Tis the season for one of my all time favorite perfumes, Caron’s Nuit de Noel.  This beautiful classic is full of comfort and joy and it’s the perfect perfume for setting the season.  The following is my post from Christmas past:

On a side note, Nuit de Noel is one of those perfumes that I always get compliments when I wear it.  Merry Christmas!

WHAT I SMELL: Tubereuse opens with a sweetened peach like, cinnamon peppered tuberose.  It’s heady without having the thickened rubberized consistency you can sometimes find with the note.  Instead, the tuberose is mentholated without being cloying or heavy.  The fruit behind the tuberose is not rich, juicy or dominant.  Instead, it’s as if it has been dried or dehydrated.  As the perfume wears, a lovely powder blankets the composition along with the addition of a spiced jasmine.  Tubereuse is not dirty at all and not indolic, but instead is a wash of exquisite powdered herbal and lightly mentholated floral highlighted by the tuberose that’s full of life, but tinged with bits of melancholy.  Like all of the Caron parfum extraits, Tubereuse is slow to transform.  After quite some time, the florals become sharpened and aloof, but they never are removed from the protected cover of the powder.  And as more time passes, the mentholated herbal quality begins to meld gracefully into the floral mix as if a dance between the two has ended as one.  Finally, in the end, the perfume softens to a gentle powdered swath of a floral dream.

WHAT IT SMELLS LIKE TO ME:  Peach kissed tuberose.

WHAT OTHERS ARE SAYING ABOUT TUBEREUSE: The Black Narcissus, Bois de Jasmin, EauMG

BOTTOM LINE:  Tubereuse is an underutilized perfume in my collection.  It doesn’t get the attention from me that it deserves and every time I wear it I wonder why I don’t wear it more often.  Maybe because its a bit formal and I have a penchant for wearing t-shirts and shorts.  Whatever the reason, it’s a perfume that deserves more attention from me and others.

Well, it was bound to happen; the fact that I was going to break one of my resolutions for the new year.  What I didn’t know that it was going to happen so quickly.  On my January 5, post “Goodbye 2014, Hello 2015” I posted the following resolution:  Only buy it if I ABSOLUTELY love it.  Probably like many of you, I am known to peruse the online offerings of eBay looking at the various fragrant goodies that are listed…and hoping for that incredible deal.  Well, a post caught my eye advertising a travel spray of Caron’s Aimez-Moi for $49.  If you have ever seen these little jewels of a travel spray, they are 20ml in size and are designed to hold the Caron urned parfum extraits.  Typically what these coffrets sell for is a bit over $200 which is a pretty good deal for 20ml of Caron extrait.  However, I questioned this posting, but immediately thought that the seller (who said it was from an estate sale) didn’t realize that what he was selling was not Aimez-Moi, but instead was N’Aimez Que Moi (by name alone this could be an easy mistake).  Aimez Moi is an oriental floral and is primarily found as an Eau de Toilette and it doesn’t come in parfum concentration which means is doesn’t come from an urn.  But N’Aimez Que Moi, a rose based chypre floral does.  So I took a chance and purchased the bottle for $49 and upon first sniff, I knew I had made the right deduction! 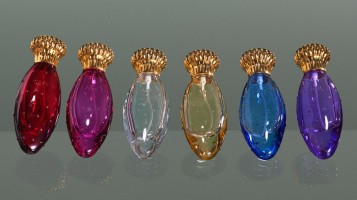 The lovely little jewel of a Caron travel spray!

WHAT I SMELL:  N’Aimez Que Moi (“love no one but me”) opens with this big enveloping and sharp metallic rose.  Like Caron’s Or et Noir, the metallic edge is biting and you wonder how this could ever turn into anything pleasant.  But after a few minutes the metallic edge is met with a puff of powdered dust, which helps to soften that harsh opening.  The rose, tinged with violet and lilac is voluminous and rather stiff and proper.  True to when it was created, it feels like a perfume from 1916.  Lying underneath the rose is a woody vetiver that is met with a light amber.  Even though the perfume is big, there’s something rather tender and heartfelt about it.    After 20 minutes or so, a creamy sandalwood comes in, bringing passion into the perfume, but a passion without lustfulness.  And further on, the oakmoss pulls some of the creaminess out of the perfume and renders a satined finish to the composition.  Most Caron parfum extraits require patience for them to achieve their “state of grace.”  N’Aimez Que Moi is no exception and when it does settle down after around the hour mark, this creamy, powdery and radiant rose becomes a restrained heaven on earth.

The First World War was raging, young women yearned for their loved ones who had gone to the Front.

N’Aimez Que Moi was given by young soldiers to their sweethearts before they left. It was a pledge of faithfulness, so they could renew their love vows every day until their men returned. 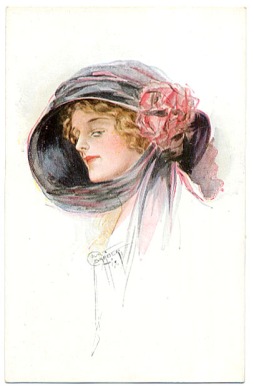 WHAT IT SMELLS LIKE TO ME:  The creative and beautiful women’s hats from the early 20th Century.

WHAT OTHERS ARE SAYING ABOUT N’AIMEZ QUE MOI : CaFleureBon, The Black Narcissus, Bois de Jasmin

BOTTOM LINE:  The Caron signature Mousse de Saxe is prominent in N’Aimez Que Moi which is a good thing.  As most of you know by now, I love my Caron and this is close to love but is more of a like.  But to find this gem for such a steal doesn’t make me feel one ounce of guilt in breaking my perfume New Year’s resolution.  Maybe this great buy is just a sign of the fantastic things that are going to occur over the new year!

It’s hard to believe that I have been at this blogging/review adventure for 3 years now.  What started as a fun way to make sense of a fascination of fragrance has turned out to be an amazing experience.  I’ve met some fantastic people, explored some incredible perfumes and opened up doors that I didn’t know existed.  It’s’ been fun.  And since this is an anniversary post and since we have to have presents at an anniversary party, I am giving away a 50ml bottle of Lady Caron Eau de Parfum.  In other words, it’s an all Caron post!  Unfortunately, because of shipping issues, I can’t include anyone who doesn’t have a US address.  To enter, all you have to do is post a comment on what your favorite Caron perfume is or what your favorite rose perfume is and why.  How simple is that?  The draw will close on Thursday, January 15 at 6pm EST and the winner will be picked via random.org and will be posted on Friday, January 16th so keep your eyes peeled for the announcement.  Good luck to all!