WHAT I SMELL:   Beat Café eases it way on to the skin with a warm, deep, striking coriander which is met with a soured boozy note.  The perfume almost has an undertone of body odor…but not in a repellent way, but in a way that says a shirt has been worn for a few days and has retained a mix of smoke, sweat and booze.  As soon as I write that, a leather note adds another layer to the well worn ensemble.  The leather adds a bit of funk combined with a light hint of danger and a lot of “I just don’t give a damn.”  As the perfume continues to develop, the funky turns more subtle as a sweetened tobacco and light wood adds the right amount of chill.   Here the perfume sits in the perfectly relaxed state of comfort, with a hint of an edge that says although it’s OK to kick back, at any time it might be time to stand up to make a difference in the world.

The early sixties mark a turning point in history. While war rages around the world, the youth starts to rally against the blind violence and oppression of an establishment it can no longer tolerate. The Beat Generation composed of a group of authors whose literature explores and influences American culture in the post-World War II era, finds its voice in Bob Dylan’s music. His bluesy melodies tinged with vitality, a rich and direct timbre, spread their message of freedom from the USA to Europe. Poet, writer and underground singer, he starts his career with amazing cafe performances. Back then cafes have become mythical meeting points where the younger generation come together to build a counter culture through music, poetry, politic, literature and fashion. A scent of revolution hangs in the air, saturated with tobacco, spirit and leather exuded from the couches where this rebel generation sits imagining a new order till the break of dawn. 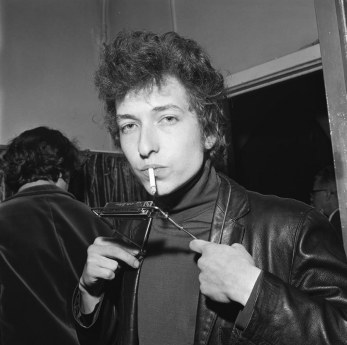 WHAT IT SMELLS LIKE TO ME:  A young Bob Dylan.*

WHAT OTHERS ARE SAYING ABOUT BEAT CAFÉ:  CaFleureBon

BOTTOM LINE: Beat Café delivers on its’ evocation of the Beat Generation.  It feels like a modern perfume, but has the soul of a bygone era.

*Jusbox is an exclusive range of perfumes whose concept is based on the similarity between perfume and music. Music is the key inspiration for all of their fragrances.  Each of the perfumes is accompanied by a playlist of music associated with the perfume.  In the case of Beat Cafe, much of the playlist contains music by Bob Dylan.  To play the playlist, go to the Beat Café page on the Jusbox website.