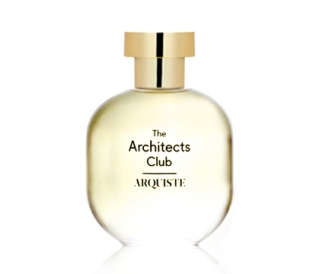 WHAT I SMELL:  The Architects Club opens with a bright  juniper and a soured lemon, like the fizz of a gin and tonic.  It’s snappy and sparking, like a lively conversation between friends.  Soon enough a woodiness develops, but the wood is sleek and it’s lightened with air making it feel rather like a balsa wood airplane.  After some more time, the vanilla sweetened guaiac wood takes center stage. However, the fragrance never becomes heavy and throughout The Architects Club’s development, it maintains its bubbly personality.  The fragrance doesn’t change much past this point, but retains this air of just the right amount of a “devil-may-care” attitude.

A group of architects gather for cocktails at Mayfair’s smartest Art Deco smoking room. As they settle in the warm interior of dark woods, leather and velvet, London’s bright young things burst in, frosted martinis in hand, surrounded by a cloud of laughter, white smoke and fine vanilla.

WHAT IT SMELLS LIKE TO ME:  Arquiste’s official descriptor above fits the fragrance perfectly.

WHAT OTHERS ARE SAYING ABOUT THE ARCHITECTS CLUB: CaFleureBon, irideScents, Chemist in the Bottle

BOTTOM LINE:  What I like about this fragrance is that it feels like it doesn’t take itself seriously.  It’s light, airy, sophisticated and quite handsome and it could be worn with a tuxedo just as well as a comfortable pair of jeans.

5 thoughts on “The Architects Club by Arquiste”