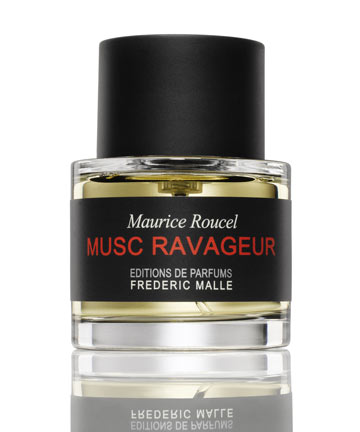 So what’s all the fuss about?  Musc Ravageur is a fragrance that evokes the either “I love it” or “I hate it” responses by those who have tried it.  It’s also one of those fragrances that have been described as dirty, sexy, sensual (and many other things in which I won’t go into detail).  Of course, given the discourse and the descriptors I too had to give this a try.  And I can see what everybody is talking about.  The first thing that comes to mind when I put this on is the phrase “plastics are the wave of the future!”  There is truly an artificial plastic petroleum aspect to this scent.  It’s heavy and it’s a heaviness that fills up your lungs.  Musc Ravageur starts with a bitch slap to the senses.  It’s moist and musky with hints of vanilla.  As the slow dry down takes place, out comes more of a warmed peppered base.  It mellows ever so slightly but not enough to take away it’s oomph.  I would have a hard time seeing a woman pull this one off, because I think of this really as a man’s fragrance because of its heaviness.  In going back and reading what I have written so far, you would think that I don’t like this.  Wrong.  I love it.  It’s a fragrance that gives you power.  There is nothing shy about Musc Ravageur, so much so that this may have to go on my wish list for a full bottle.

Sensual and sophisticated. Powerful yet perfectly controlled. Dramatic and mysterious. MUSC RAVAGEUR is a grown-up perfume, an uncompromising Oriental, which trumps current fads. Its explosive departure of bergamot, tangerine and cinnamon is set against a lusty backdrop of vanilla, musk and amber. No flowers, just a refined and exalted skin scent.